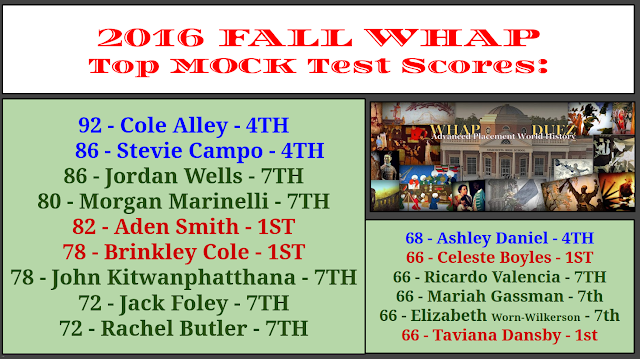 However, this is based on the old version of the test and not the new 2017 version. Still it is a solid estimate of what type of performance you would need. 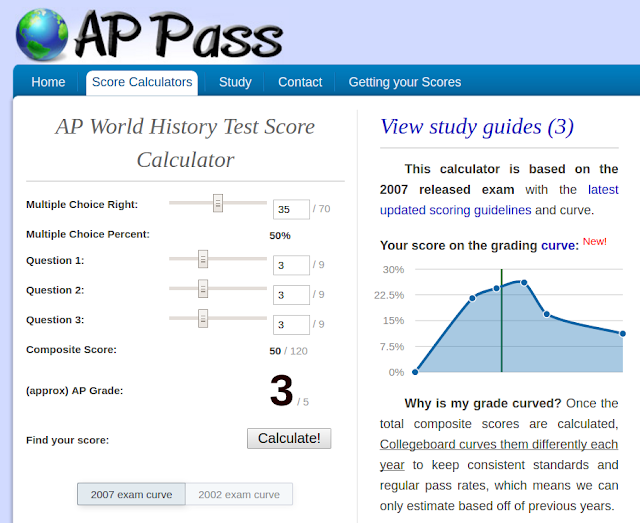 Learning Targets:
• Consider the variety of human experience in the fifteenth century and compare those experiences across cultures.
• Contrast the political and cultural conditions in China’s Ming Dynasty and Europe’s “Renaissance Period” on the cusp of the modern world and analyze why Europe came to dominate the world in the modern era.
• Determine the factors that bring about change in the Islamic world (Middle East and West Africa) in the fifteenth century and analyze the differences between the four Muslim Empires.
• Contrast Aztec and Inca thinking about political administration and culture.

Essential Questions:
1. Assume for the moment that the Chinese had not ended their maritime voyages in 1433. How might the subsequent development of world history have been different? What value is there in asking this kind of “what if ” or counter-factual question?
2. How would you define the major achievements of Ming dynasty China?
3. What political and cultural differences stand out in the histories of fifteenth-century China and Western Europe? What similarities are apparent?
4. In what ways did European maritime voyaging in the fifteenth century differ from that of China? What accounts for these differences?
5. What differences can you identify among the four major empires in the Islamic world of the fifteenth and sixteenth centuries?

1. DO NOW: Quiz Review Question from Friday (Because of the Pep Rally we didn't cover them in class) 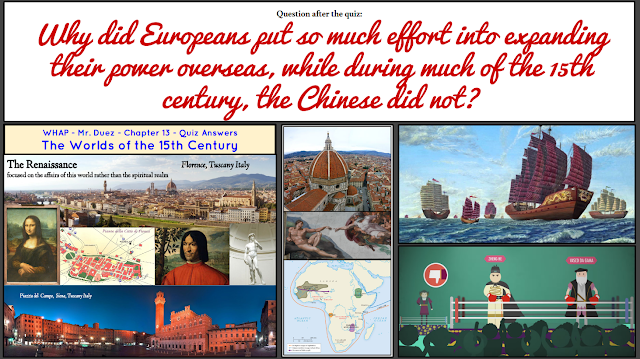 3. Review 12 & 13 - Prep for Test on Tuesday (pre-Thanksgiving stuff has a heavy emphasis)

EXTRA CREDIT DUE ON FRIDAY, DEC. 11

2. Test Corrections. We will continue these on Friday and also on Monday in class.
You CAN NOT take these questions outside of the classroom.

3. DBQ - Last 30 minutes of class. 2007 *Revised DBQ to 2016 Standards*
Using the documents and your knowledge of world history, compare Han and Roman attitudes toward technology.

Agenda:
Extra Credit (Review &/or Graphic Org.) due.
1. MOCK AP Test Corrections: We will continue these on Monday in class. You may not take these questions outside of the classroom.

2. Mr. Duez will collect Test Corrections near the beginning of the period.

Best of Luck on Your Finals!
Have a fantastic holiday.