What is Multiple Sclerosis?

Multiple sclerosis, or MS, is a disorder that turns the body's immune system against itself. Over 2.5 million people world wide suffer from the disease.

The cause of MS is still unknown – scientists believe the disease is triggered by as-yet-unidentified environmental factor(s) in a person who is genetically predisposed to respond.

Multiple sclerosis (MS) involves an immune-mediated process in which an abnormal response of the body’s immune system is directed against the central nervous system (CNS), which is made up of the brain, spinal cord and optic nerves.

Mr. Duez was diagnosed with Multiple Sclerosis (MS) in January of 2011. It is a disease he shares with his sister and aunt. One person every hour is diagnosed with MS, but it is a very rare disease of the brain and central nervous system. Although MS has been a challenge, it has taught him to appreciate life in many ways.

MS is a difficult thing to live with and every day is challenging. But, Mr. Duez believes strongly in the power of distraction. As Woody Allen once said, "What do I have faith in? I guess I have faith in the power of distraction, that in the midst of this veil of tears there are things, a good book, a good movie, which can distract us from the situation in which we truly find ourselves."

In David Duez's case, work and pursuing learning with his students is a wonderful distraction that keeps life in perspective. Every day at Atascocita High is a great day!

Mr. Duez also believes in the power of 5 simple letters:

"Don't Forget to be Awesome!"
As John & Hank Green made famous, the simple initial ism really does strike home. We all have something that gets in our way. Something that becomes an obstacle. But, don't let that distraction take you too far from who you are and who you want to be.
When you battle MS it sometimes feel as though you are struggling to find the person you used to be. Trying to remember to be that awesome person to those around you is imperative. I reach down and pull out awesome & hopefully most won't need to even ask the question, "How are you feeling today?" Because honestly, I don't like to lie to people. ;-)

Link to the 2015 MS Awareness Volleyball Game - Atascocita Vs. The Woodlands 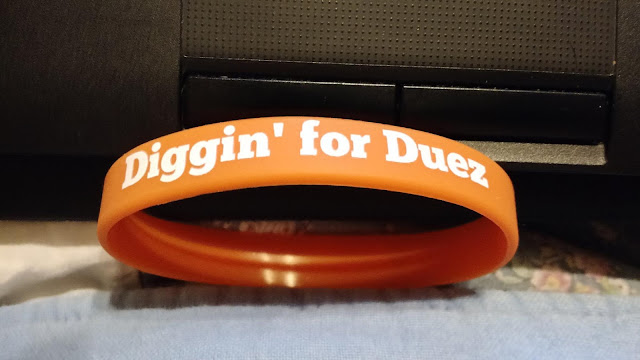 National Multiple Sclerosis Society
About MS From the Mayo Clinic Website
From a post on my website from 2011:
It has been hard to keep up with all the wonderful things that have happened with the MS Awareness Campaign and fund-raising that has gone on this spring at AHS.  I am attempting to keep up through this post and link to all the other stories.  It has been inspirational to me.

I can not tell you and fully express how grateful I am to everyone.  So many have given and wished me well, it is overwhelming.  The support has really given me the push I have needed to realize that even if I have been given a bad break, there are so many great people in my life.

There is no doubt that I will be coming back to this post and reading all of this during my very bad days.  It is this kind of support, friendship and spirit of community that is the best possible medicine I can receive.

It's a Great Day to be an Eagle!  DFTBA!

Dive in for Duez & MS Fund Raiser in the Pool
A thank you to the AHS Patriettes and their superior kindness in donating money from their spring show to the Houston Chapter of National MS Society.
Article in the local paper: Observer about the AHS MS Awareness campaign

Operation Bald Eagle - Head Shaving for MS Awareness.
Email to the AHS Faculty with lots of pictures of the events during the MS Awareness campaign.
Video and information: Atascocita vs. Kingwood MS Benefit Softball Game.
Former students Celeste & Kandice rode their bikes in the MS-150 in Mr. Duez's name.
Former student Sara did as well. Sara's MS-150.  :)
Information about MS-150 Bike Ride from Houston to Austin
Link to the flyers for the Charming Charlie's Fund raiser -and- Appleby's Dinner Fund Raiser

Link to our pics modeling the MS Awareness T-Shirts.


Great article: How it feels to have MS - A Creative Anaology by Julie Stachowiak, Ph.D.

Many people living with MS experience “invisible” (or not outwardly visible) MS symptoms. This can create a unique set of issues. Some people assume that you don’t really have a disease. This can
undermine your confidence and your relationships, and discourage you from seeking treatment or help for problems. Add in living with all the other things that other people can’t see — your
feelings of anger, uncertainty, frustration and fear. Still, people will look right at you and say, “But you look so good!”

Everyone experiences fatigue sometimes, but people living with MS are hit hard by a kind of fatigue that sometimes feels totally overwhelming. This can be hard to explain to outsiders. People with MS often expend extra effort on activities — such as lifting legs to walk — which once were second nature. These efforts add to the burden of MS fatigue.

People with invisible symptoms must constantly adjust to the differences between how they feel “inside” and how the world reacts to them when they “look so good.” Family members, friends, employers and even doctors may doubt the validity or intensity of invisible symptoms. When people question you often enough, you may begin to doubt your own perceptions. MS is different for every person who suffers with it.

While everyone is forgetful sometimes, people living with MS may have memory lapses that signal cognitive impairment, one of the most challenging hidden symptoms of MS. Neurologists in the MS
community now recognize that cognitive impairment affects up to 60% of all people with MS. The problems are usually subtle and are termed “mild,” but they can have a major impact on a person’s life.

More on Courtney Galiano, dancer from "So You Think You Can Dance" and "Hit the Floor"

The diagnosis of MS requires evidence of at least two areas of damage in the CNS, which have occurred at different times.

The exact antigen — or target that the immune cells are sensitized to attack — remains unknown, which is why MS is considered by many experts to be "immune-mediated" rather than "autoimmune."

Within the CNS, the immune system attacks myelin — the fatty substance that surrounds and insulates the nerve fibers — as well as the nerve fibers themselves. The damaged myelin forms scar tissue (sclerosis), which gives the disease its name. When any part of the myelin sheath or nerve fiber is damaged or destroyed, nerve impulses traveling to and from the brain and spinal cord are distorted or interrupted, producing a wide variety of symptoms.

The disease is thought to be triggered in a genetically susceptible individual by a combination of one or more environmental factors. People with MS typically experience one of four disease courses, which can be mild, moderate or severe.

VIDEO: MS Impacts Us All: 2.5 Million People in the world have been diagnosed with MS

VIDEO: Montel Williams Describes the EVERY DAY Routine of MS & the Difficulty