The Story of "Keep Calm and Carry On" 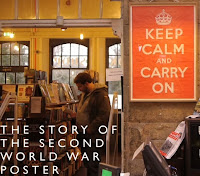 This is such a good video and gives us great insight into the history of this iconic poster. Ironically, it wasn't widely distributed until the 21st century. But, the British had the idea to use these posters to help people deal with the difficulties of war. Especially difficult was the civilian bombing of Britain by Adolf Hitler's Nazi forces after the occupation of France.

Neat stuff!
Check out the video below:


Of course, Mr. Duez uses a "Keep Calm" poster himself. But, adds the more exclamatory "DFTBA" at the bottom. Which means, "Don't Forget to be Awesome." How could we forget with such a great poster design?

There is even a KeepCalmAndCarryOn.com website.
on Thursday, March 08, 2012