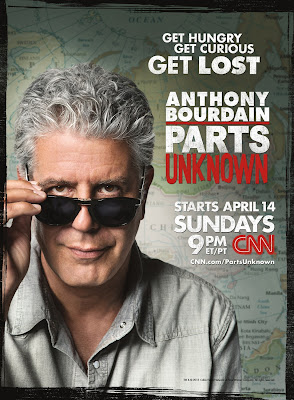 Sunday evenings at 8pm CST, Anthony Bourdain (known from such other shows as No Reservations and Layover) brings his special style of travel, cultural appreciation, and incredible appetite for all things spicy, flavorful, and interesting to eat. The first episode was Myanmar. This episode is Chapter 23 of Strayer come to life. And 24 for that matter. The end of European colonialism led to democracy for some, strong-gripped military-style control for others. Myanmar experienced the latter.

I never step away from a show that Anthony Bourdain does without learning more about history, appreciating what it might be like to walk a mile in another man's shoes, and I am usually craving something tasty to eat. (Especially if there is anything of Asian cuisine)

His trip to Burma.... I mean... Myanmar (it was formerly known as Burma, and the Burmese are just one of hundreds of ethnic groups of people who live there) is truly something special. Western media has not stepped foot into this country for far too long. To do so might have brought imprisonment and certainly could have resulted in the death of anyone in your crew and anyone you interviewed or spoke to while in the country. It was that terrible.

Watch the entire show here: Parts Unknown Episode 1 - Myanmar
With the slight relaxation of control by the government of Myanmar, Tony is finally able to explore one of the most fabled and beautiful areas of Asia. A human-powered Ferris wheel, a punk rock group and one scary train ride. Anthony Bourdain experiences it all in Myanmar.

Finally things are starting to loosen up. Obama visited and spoke there. The beautiful soul and democratic leader Suu Kyi has finally been released from prison. Things feel different, yet you can tell when watching this show that the people of Myanmar aren't 100% sure. How could they be.