Part 2 - The Classical Era in World History, 500 B.C.E. - 500 C.E.
Chapter 4—Eurasian Empires, 500 B.C.E.–500 C.E.
Quick Agenda:
MON - Reading Check Quiz CH 4, Constitution Day, Intro Eurasian Empires
TUE - Persians & Greeks, 300, Alexander The Great
WED/THU - Rome: From Republic to Empire, Han China: From Warring States to Empire
FRI - TEST Chapter 4 Eurasian Empires
Monday, Sept. 17, 2012
Quote of the Day: "Their memory abides and grows. It is for you to try to be like them. Make up your minds that happiness depends on being free, and freedom depends on being courageous." - Pericles, leader of Athens, "Funeral Oration: In Defense of Democracy"

Learning Targets:
*Define the characteristics of imperial systems in the classical era and analyze why empires developed in some regions but not in others.

Essential Questions:
* What common features can you identify in the empires described in this chapter?
* How did Persian and Greek civilizations differ in their political organization and values?
* Why did semi democratic governments emerge in some of the Greek city-states?

Tuesday, Sept. 18, 2012
Quote of the Day: It is said that on the eve of battle, he was told by a native of that the Persian archers were so numerous that, when they fired their volleys, the mass of arrows blocked out the sun. Dienekes, however, quite undaunted by this prospect, remarked with a laugh,
'Good. Then we'll have our battle in the shade.'
—Herodotus, The Histories

Learning Targets:
* Compare the important similarities and differences between imperial systems and the reasons behind them
* Explain the significance that classical empires have for us today, such as, representative government, military power, etc.

Essential Questions:
* In what ways did these empires differ from one another? What accounts for those differences?
* What were the consequences for both sides of the encounter between the Persians and the Greeks?
* What changes did Alexander’s conquests bring in their wake?

Agenda:
1. DO NOW QUESTION: What were the consequences for both sides during the encounter between the Persians and the Greeks?
2. Notes & Discussion - Persians & Greeks - How did their geography, culture, values, and empire impact the world?
3. Video: The Last Stand of the 300 Spartans LINK to the video clip.
Extended lesson: At home, as you watch the video clip, answer this question on your sheet of paper:
What was the impact of Alexander the Great's conquest of Persia?
Link to the video Mr. Duez created from the Iron Maiden Song: Alexander The Great.
Wednesday, Sept. 19, 2012 & Thursday, Sept. 20, 2012
Quote of the Day: "SPQR" - Senātus Populusque Rōmānus "The Senate and People of Rome"

Learning Targets:
* Explain the significance that classical empires have for us today, such as, representative government, military power, etc.
* Evaluate the “greatness” of the Roman Empire and China’s Han Dynasty and determine if their destructive and oppressive features outweighed their impressive advances.

Essential Questions:
* Are you more impressed with the “greatness” of empires or with their destructive and oppressive features? Why?
* Do you think that the classical empires hold “lessons” for the present, or are contemporary circumstances sufficiently unique as to render the distant past irrelevant?
* How did Rome grow from a single city to the center of a huge empire?
* How and why did the making of the Chinese empire differ from that of the Roman Empire?
* In comparing the Roman and Chinese empires, which do you find more striking—their similarities or their differences?
* How did the collapse of empire play out differently in the Roman world and in China?
* Why were centralized empires so much less prominent in India than in China?


Agenda:
1. DO NOW QUESTION: In comparing the Roman and Chinese empires, which do you find more striking—their similarities or their differences? Explain.
2. Notes, Video, Discussion - Rome: From Republic to Empire.
3. Notes, Video, Discussion - China: From Warring States to Empire.
4. Socratic Study - students will be in 5 table teams of 6 students.
Students will work in teams to determine the meaning of passages of text and quotes from various works: 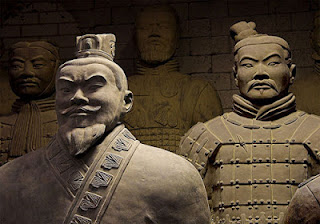