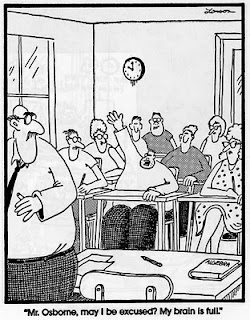 Quote of the Day:  "Common sense and a sense of humor are the same thing, moving at different speeds. A sense of humor is just common sense, dancing." - William James, American psychologist and philosopher (1842 - 1910)

Learning Targets:
Agenda:
1. DO NOW QUESTIONS: Choose one of the two Big Picture Questions and answer as completely as you can:

Write out your answer in your notes.
(This week the Big Idea questions from Strayer will be our Do Now questions. You also have the opportunity to answer one of them in essay form for extra credit on the test. It is due just before the test on Friday.)

2. Students will do document study from Strayer 5 in groups. We will discuss the documents and compare the religious traditions for the first 50 minutes of the class period.

Focus on these questions:


The Good Life in Classical Eurasia
3. Notes & Discussion: Monotheistic Religious traditions. The final portion of the period will be discussion about the monotheistic traditions: Zoroastrianism, Judaism, and Christianity.

TEST IS FRIDAY.
Extra Credit - Big Question Essay due before the test Friday.
on Monday, September 19, 2011